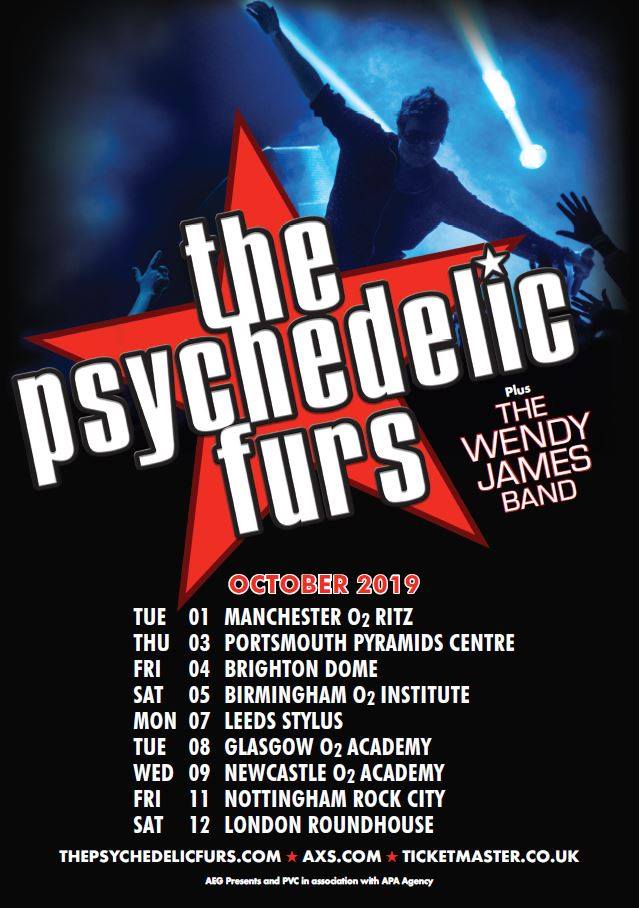 The Psychedelic Furs in Portmouth, UK
Biography
If you sit and talk to many of the alternative rock artists dominating today’s music, you’ll find that many of them pay homage to the The Psychedelic Furs. Led by front man and songwriter Richard Butler, the Furs won over fans and critics alike by combining poetic lyrics, innovative rhythms and melodies driven by an aggressive, punk desperation. Through it all, the band scored major hits with “Love My Way,” “Pretty In Pink,” “Heaven,” “The Ghost In You,” and “Heartbreak Beat” in all releasing seven studio albums and spawning several compilations, a boxed set, and a live concert DVD.

The Psychedelic Furs came together in England’s emerging punk scene in 1977 initially consisting of Richard Butler (vocals), Tim Butler (bass guitar), Paul Wilson (drums), Duncan Kilburn (saxophone), and Roger Morris (guitars). By 1979, this line up had expanded to a sextet with Vince Ely replacing Wilson on drums and John Ashton being added on guitar.

The Furs debut, a self-titled album from 1980 was produced by Steve Lillywhite. The LP quickly established the band at radio in Europe and was a top 20 hit in the UK. The album also found success in Germany, Italy, France, Spain, New Zealand and Australia.

The Furs found success in the U.S. with their next release, 1981’s Talk Talk Talk, which saw the band making its debut on the US album charts. In New Zealand, meanwhile, the band became immensely popular, as Talk Talk Talk reached the top ten in the charts, the first in a string of Furs’ albums to chart in the New Zealand Top 10.

In the UK, the album spun off two charting singles, “Dumb Waiters” and the original version of “Pretty in Pink”. The latter song served as inspiration for the 1986 John Hughes film of the same name, and was re-recorded for the film’s platinum-selling soundtrack.

In 1982, the Furs, now a four-piece with the departures of Morris and Kilburn, recorded Forever Now, with producer Todd Rundgren in Woodstock, New York. This album included “Love My Way”, which became yet another UK and US chart hit.

Ely left the band after Forever Now, although he would return for the 1988 single “All That Money Wants” and the 1989 album Book of Days.

The Furs’ 1984 release Mirror Moves was produced by Keith Forsey, and featured the songs “The Ghost in You” and “Heaven”. Both charted in throughout the world, and “Heaven” became the band’s highest charting UK hit at the time.

By the mid-80s, the band had become a staple on both U.S. college and modern rock radio stations. Simultaneously, they were experiencing consistent mainstream success, placing several singles in the pop charts on both sides of the Atlantic.

In 1986, the band recorded a sax-infused version of “Pretty in Pink” for the soundtrack of the film of the same name. Released as a single, it became their biggest hit to that time in the U.S., and their biggest-ever UK hit.

“Midnight to Midnight”, was their biggest Top 40 album success to date, but also a more overtly commercial effort than the Furs had ever recorded before. The album also featured the single “Heartbreak Beat”, which became the Psychedelic Furs biggest hit yet on the U.S. Top 40. The album also featured drummer Paul Garisto and sax player Mars Williams, both of whom continue to tour with the band.

In the wake of Midnight To Midnight, the Furs subsequently returned to a rawer sound with “All That Money Wants”, a 1988 track especially recorded for a best-of compilation album “All Of This And Nothing”. 1989’s Book of Days and 1991’s World Outside also saw a return to the earlier Furs’ style.

The band went on extended hiatus in the early 1990s, with the Butler brothers going on to create the band “Love Spit Love” along with guitarist Richard Fortus and drummer Frank Ferrer. Love Spit Love released two albums and enjoyed some chart success as well.

After spending most of the decade apart, the Butlers and Ashton reignited The Psychedelic Furs in 2001, and released a live album Beautiful Chaos: Greatest Hits Live, which also featured a new studio recording, “Alive (For Once In My Lifetime).” A DVD version of the performance included live versions of “Alive” and three other previously unreleased songs: “Anodyne (Better Days),” “Cigarette” and “Wrong Train.”

Since then, lead singer Richard Butler has released an eponymous solo album produced by Jon Carin, and has hinted at the possibility of a new Psychedelic Furs album.